Living on the coast of Florida is a dream, unless a hurricane is barreling down on you. For those of us who live in Florida, hurricanes are an ever-present possibility from June through November. It is not just our state that is threatened though. From the southern tip of Texas around the Gulf Coast of Florida, up the East Coast to Maine, and extending over 100 miles inland along this border, the United States is at risk for serious hurricane damage. The American Society for Civil Engineers recommends certain structural standards for homes and buildings located in these hurricane zones, and their ASCE 7-05 map, collecting potential wind speeds, show those places with the most severe risk from Hurricane winds to be on the coasts from North Carolina to Texas. Florida is the only state where every square mile is under threat from Hurricane winds. This threat obviously poses a danger to our loved ones and ourselves, but it also poses an extreme threat to the homes we cannot evacuate.
Roofs play a very important role in maintaining the structural integrity of your home during a hurricane. If you can adequately protect your windows and doors from being compromised during a storm, you may only have to worry about your roof. But if you lose your roof structure during a storm, your walls will certainly follow. Your roof can be at risk of being damaged in even the weakest hurricanes (Categories 1 and 2), and risks complete removal during major storms (Categories 3, 4, and 5). The National Hurricane Center’s Saffir-Simpson Hurricane Wind Scale shows just how much your roof is at risk in different hurricane strengths: 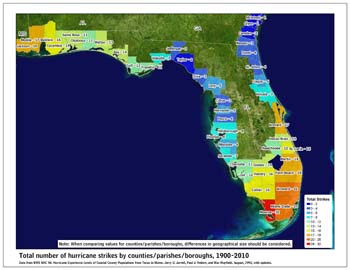 Category 4: “Well-built framed homes can sustain severe damage with loss of most of the roof structure and/or some exterior walls.”

Category 5: “A high percentage of framed homes will be destroyed, with total roof failure and wall collapse.”

While there may be nothing you can do to save your roofs from a direct hit by the most severe storms, there are choices you can make that might help mitigate the damage. The Palm Beach Post informed its readers about how certain roofs faired during the storms of 2004 and 2005—extremely active hurricane seasons with multiple landfalls in Florida. The Post attributed the majority of roof failures to two causes: “Age and improper installation caused most roof failures in the 2004 and 2005 hurricanes.” They also provided other facts about roofs after the storms.

—“Metal roofs had the fewest problems, followed by tiles applied with concrete or foam adhesive.”

—“Shingle roofs came off in the thousands.”

—“Shingles become brittle and lose adhesion in the Florida sun after about 12 years even if they were properly installed.”

—“Roofs installed after the mid-1990s, when building codes began to change statewide after Hurricane Andrew, survived better than those installed earlier.”